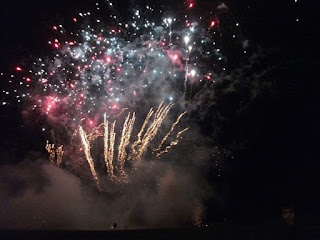 If you're reading this -and you're not from the UK- this title might leave you a little bewildered or even amused.

Bangers - for today's purposes- are both noisy fireworks and a slang word for sausages. If you thought differently, then please stop sniggering at the back and pay attention.

Because Bonfire Night (November 5th) is no laughing matter and is taken very seriously here in Sussex.


In the 19th Century there grew up 'the cult of the Sussex martyrs' (commemorating the deaths of the 17 Protestant Lewes martyrs during the reign of Mary Tudor) and the Sussex bonfire societies began to develop. Now there is a society for practically every village or town in Sussex and they spend all year planning their costumes, processions and their bonfire (and effigy to burn).

I'm not a big fan of effigy-burning or of noisy fireworks - but I've gradually been won over by the Battel Bonfire Boyes (the oldest of the societies) who host a magnificent procession and firework display on the famous battle ground of the Battle of Hastings. 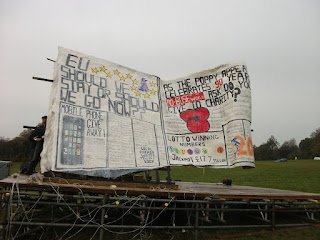 Last year they burned the News of the World in effigy- much better choice than the pope-burning, firework-throwing hooligan-fest which is the Lewes bonfire.

Whilst not much liking the idea of firework nights, I do think back happily to standing by a bonfire, drinking tomato soup, cooking baked potatoes in the embers, eating hot dogs and remembering bonfire parties with my children where we put sparklers in the top of 'Bonfire Cake' ( said cake pictured below ).


As ever, it's the food that makes the occasion.

So, back to the sausages- which are today's blog ingredient of choice.

First up, I made a batch of sticky glazed chipolatas:

The sausages are browned and then placed in a roasting dish with a dessertspoon each of honey and coarse grain mustard. I roast them at 200 degrees for 20 minutes or until they are glossy and sticky with the marinade. Use the sausages in any number of ways (and make a delicious sauce by deglazing the dish with hot water or meat stock and thickening in whichever way you like best- gravy granules, roux or cornflour paste). 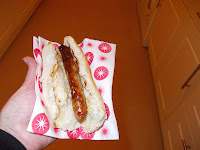 Or lay them on a bed of mash or Colcannon and pour on that honey and mustard gravy. You can make a children's version with cocktail sausages too :

Or put them into a traditional Toad-in-the-Hole:

Make a batter with 150g plain flour, 2 eggs, a pinch of salt and 150 ml milk.
Heat a tablespoon of oil in  a roasting dish in the oven at 200 degrees until it begins to smoke slightly, quickly lay in the sausages and pour the batter around them. Cook for 30 minutes or until the batter is risen and crispy.
Don't forget the honey and mustard gravy.

Butchers, farm shops (and supermarkets) have a really good range of sausages now: everything from traditional pork to those made with local ales or even Marmite!

I bought some fiery chilli sausages locally for these next two recipes- but you could use Merguez or chorizo.

First take the sausages out of their skins and combine with some plain pork sausagemeat, some breadcrumbs and some finely chopped spring onion. Divide the mixture into two and use one for the first recipe and one for the second.


Shape the meat into patties and fry in hot oil until browned and cooked through. Serve with tabbouleh and some tomato salsa.(Just use the search box to find the salad recipe).

The other half of the meat mixture I rolled in  blanched cabbage leaves and made Stuffed Cabbage Rolls as below (again the recipe is elsewhere on the blog, just search for it):


Finally, meatier sausages- like Toulouse or traditional links- go well with lentils and vegetables for an economical and very tasty Autumn supper. Cook a diced onion and some finely diced carrot and celery in a little oil. Add a tin of green lentils, plus a 'tinful' of water or stock, a teaspoon of coarse grain mustard and a splash of red wine. Cook until the liquid has been mostly absorbed and then adjust the seasoning. Lentils need a bit of salt usually. Add your pan-fried sausages and leave to simmer for 10 minutes to allow any flavour from the sausages to permeate and serve with crusty bread or boiled potatoes.

I've used a picture from the Net above as my own refused to be photogenic, and looked less than appetizing. Although I assure you it was delicious!

Alright, I'll show you- but you mustn't laugh.

Remember what I said about bangers not being a laughing matter?

Is that sniggering I can hear at the back?