Kohlrabi, Kale and a Kitchenful of Veg


Just look at all this glorious vegetable bounty. It's the result of a visit to my friend's allotment where she invited me to help myself to anything and everything that needed harvesting.
So, I have a trugful of green beans, Swiss chard, kohlrabi, curly kale and ruby chard to take home.

I feel inspired- and about time too as I have been suffering from blogger's block recently.

What did I make? A stir-fry, 3 soups, fritters, stuffed leaves, lasagne and a gnocchi bake. Not bad eh? Here's how.

First things first- a super fresh summer stir fry is in order- radishes, spring onions, kohlrabi, beansprouts, chard stems and green beans.
Freshly picked, the kohlrabi can be sliced and stirfried as it is- but if you prefer, you can steam or boil it until tender first. Do so in its peel though, to keep its delicate flavour (and then peel it afterwards)
Once prepped, the veg can be simply cooked in some hot oil in a wok, then some cooked noodles, sweet chili and soy sauce mixed in.

The leftovers make a substantial soup, added to miso or chicken stock.


Kohlrabi has been described as 'part veg- part alien' because of its otherwordly colour and knobbly appearance.
It is really a form of turnip and has the same creamy and slightly spicy flavour. For that reason it does well in Indian dishes. For something a bit unusual - try these fritters, made with shredded kohlrabi and spring onions.

Shred the raw kohlrabi in a food processor. (Incidentally, it would make a great slaw like this with shredded carrot, apple and spring onion).
Chop 2-3 spring onions and mix in with the kohlrabi. Add a teaspoon of curry powder, a pinch of turmeric and a tablespoon of flour. Season well with salt and pepper and then mix in an egg to make a batter. 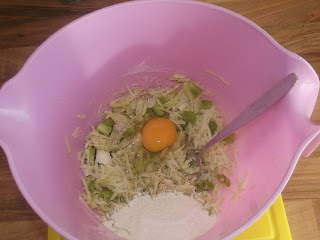 Heat some oil in a frying pan and shallow fry spoonfuls of the mixture until golden on both sides.
You can eat this as a starter like a bhajia  with raita or hummus or as a side dish.

Next- the Stuffed Ruby Chard leaves. (The red stems went into the stir fry).
These are steamed for a few minutes and then drained on kitchen towel.


I made a meatball mixture from breadcrumbs blitzed with fresh parsley and garlic (keep a tablespoon back to sprinkle over the top), minced turkey and an egg. Season and mix the ingredients well, then form into meatballs using wet hands.


Fry the meatballs to caramelize the outside, and when cool enough to handle, wrap in the chard leaves, lay in a gratin dish and pour over some tomato sauce. (I used a ready-made tomato and mascapone sauce and it went really well). Sprinkle on the remaining breadcrumbs and bake for 15-20 minutes until bubbling in moderate oven.


The green chard leaves I blanched for 2 minutes in boiling water, then into cold water to preserve the colour. I squeezed them out in a J Cloth and used them as a layer in a lasagne:  leftover bolognaise ragu, then pasta, then chard leaves

ragu, pasta, bechamel sauce, grated cheese and a dusting of nutmeg for the final layer. Baked for 40 minutes again in a moderate oven until golden.


Time for another soup- this time using the chard stems. Chop these and use them exactly as you would celery. I softened some onion and garlic in a soup pan, added the chard stems, a few chopped new potatoes and 1 1/2 litres of chicken stock. Simmer until the veg is all tender, then blitz with a stick blender, add 1 tablespoon of chopped parsley and adjust seasoning to your taste.


Now, the gnocchi.
Cook these little potato dumplings according to the instructions on the packet- usually for just 2-3 minutes or so in boiling water. Drain and set aside with a tea towel over the top.
Make a bechamel sauce, season well and add 100g of grated spicy cheddar with chilli.
Meanwhile blanch and squeeze the kale as for the chard leaves above, and then chop and fry with a crushed clove of garlic in a deep frying pan or wok.
Add the gnocchi and toss together, then mix in the chilli-cheese sauce.

Pour into a gratin dish and bake until bubbling and browned on the top ( 20 minutes or so in a hot oven).


Last, but not least- if you have leftover cooked veg I often put it all into my Use-it-Up minestrone- vegetable stock simmered with tomatoes (or leftover pasta sauce) soup pasta, any cooked veg such as green beans, courgette, peppers, kale or spring onions and- the secret ingredient- any leftover baked beans. Season well- a kick of hot sauce goes well with it too, I am told.


Phew! I think it's time to stock up on some more veggies!

Posted by leftoverliz at 10:38 No comments: