Quick Meals for One 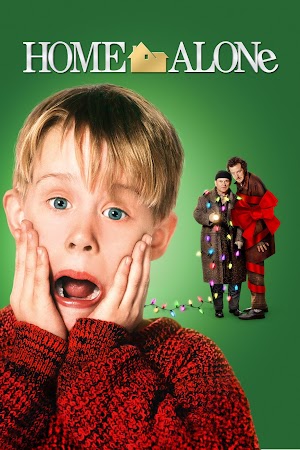 Luckily it is only temporary.
But nevertheless I faced the prospect of two weeks of cooking just for me.

'Heaven'- you might think- you can cook what you want to cook and eat and never mind about anyone else.

Tempting though the prospect of all my favourite foods might seem, the usual joie de vivre which has me skipping into the kitchen each evening to prepare something delicious has also abandoned me.

For the first week, I didn't starve of course. My freezer is full of leftover single portions (lasagne, pasta bake, Chow Phan, risotto) which I put aside for evenings when one or other of us is home alone.
But by Week 2 I needed to start cooking some proper food from fresh.

I wanted to eat something tasty- but I wanted it to be quick.
So here are some of the quick and tasty meals that I drummed up this week.

When in doubt (as my Mum used to say)- reach for a box of eggs.

A poached egg is a thing of beauty - and I used one to top three of my favourite dishes.Eggs Florentine,Corned Beef Hash and Salade des 3 Vallees.

But first, how to make the perfect poached egg.
If you really want to create a nicely shaped egg- especially if you are using it for a dinner party dish for example, follow these simple steps.

1. Line a ramekin dish with cling film and lightly oil the film with a flavourless vegetable oil 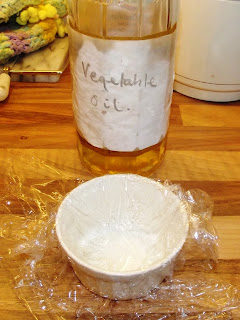 2. Break the egg into the film and tie it up with a twist like a little money bag 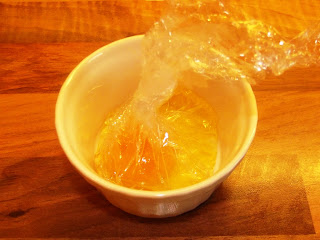 3. Bring a pan of water to the boil and turn down to a simmer

4. Place the little money bag in the water for 1 1/2 minutes 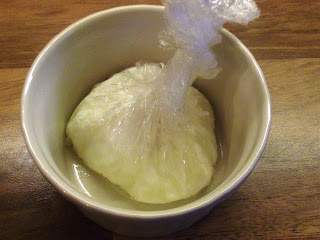 5. Take it out and place it in a cold bowl to stop the cooking process (You can keep them in this state of suspended animation for an hour or more if you want).

6. When you are ready to eat, pop it back into the water for 30 seconds and then fish out, unwrap and serve.
Hey presto! A perfectly round poached egg, with a soft runny yolk.


To make Eggs Florentine, you need first to make a Hollandaise Sauce. There are three ways to do this
1. Buy it readymade- M and S do a good one
2. Make the Mayo Hollandaise from the blog here, using spoonfuls of mayonnaise, melted butter and lemon juice
http://lizsleftovers.blogspot.co.uk/search/label/hollandaise
3. Make this simple sauce in the food processor:

Melt 60g of unsalted butter in a pan or microwaveable dish.Take one egg yolk, the juice of half a squeezed lemon, a pinch of cayenne pepper if you have it and half a teaspoon of salt and put them in the goblet of the food processor or blender. Start the motor running and quickly but steadily trickle in the melted butter. Just watch the sauce emulsify. If it gets too thick, add a squeeze more lemon or a teaspoon of warm water.
Don't throw away your egg white- freeze it to use in meringues or cakes later.To make Eggs Florentine- steam or microwave some spinach leaves, squeeze them quickly in a J cloth, then lay them on top of a toasted English muffin. Top with a softly poached egg and a good slather of the sauce

Now, how about a simple salad? This one originates from an auberge we often frequent in the Auvergne. Strictly speaking, it is best made with the lovely green Puy lentils from the region- but for speed I am using tinned here.

Drain the lentils, mix with a good mustardy vinaigrette, some chopped spring onions and whatever you have to hand- cooked veg, tomatoes etc
Serve in a bowl with salad leaves, crispy bacon and of course a poached egg.

And to finish off the trio- Corned Beef Hash with Bacon and Eggs.

Brown a chopped onion in a frying pan and add some crushed garlic. Mix in some cooked boiled potatoes or leftover mash and 2-3 slices of corned beef, crumbled up.
Mash around in the pan and fry until golden underneath, mix it up some more so that the crunchy bits get mixed in and repeat the process.
Serve- you guessed it- topped with some crunchy bacon and a poached egg.

By the way, if you would like some more ideas,there are some good ones on this website- including one from Yours truly
.https://www.google.co.uk/url?sa=t&rct=j&q=&esrc=s&source=web&cd=1&cad=rja&uact=8&ved=0ahUKEwivoevQyuvMAhXHiRoKHWhFC3EQFggcMAA&url=http%3A%2F%2Fwww.theguardian.com%2Flifeandstyle%2F2015%2Fnov%2F07%2Fmexican-guacamole-socca-spaghetti-recipe-swap-meals-for-one&usg=AFQjCNGMHOuoxOEgto0NJLJSdIP4TKU4KA&sig2=u_mHuArKg_6qx02EZjLdaA&bvm=bv.122448493,d.d2s

I haven't made the Quesadillas recipe on the above website- but I intend to. Indeed, Quesadillas (or my own version made with pitta bread on the sandwich toaster) is my next favourite way to quickly rustle up a meal for one.

Firstly I unveil the Banoffanini- like a sweet panini but with a Banoffee filling.

Lightly butter the outside of a fruit teacake or slices from a fruit loaf. Fill the bun or sandwich with sliced banana and caramel sauce. 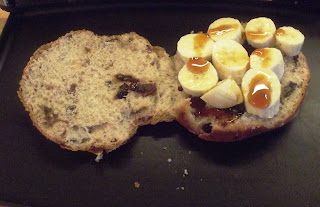 Press down in the sandwich machine and toast until crispy on the outside (but molten on the inside). Serve with whipped cream or ice cream.


And now the Chock Berry- the same but with fruits of the forest and chocolate sauce. Mmm!

And so my blog and my fortnight of solitude comes to an end. I hope you enjoy the recipes- with or without company!

Posted by leftoverliz at 09:24 No comments:

Speculoos biscuits- those little cinnamon nibbles you get with a cup of coffee- are all the rage in France. You can get Speculoos spread (like Nutella but with cinnamon), Speculoos Tiramisu, ice cream, instant dessert mix, flavoured yoghurt- you name it.

You can buy them in the UK too- under different brand names  like this one....

and they are worth seeking out for their crispy-crumbliness and spicy flavour.

However, all these recipes work well with good old ginger biscuits too. Friends of mine even substituted Nice biscuits for some of them and apparently the result was pretty good.

The first recipe I set out to try was Poached Pears in a Speculoos crust.

Poach four pears in 400 ml water into which you have dissolved 100g of sugar and placed 4 star anise. 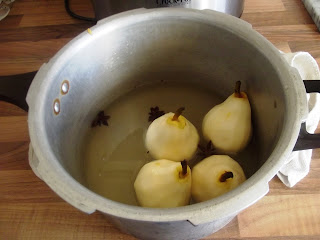 When the pears are tender, take them out to cool and strain the syrup into a jug. 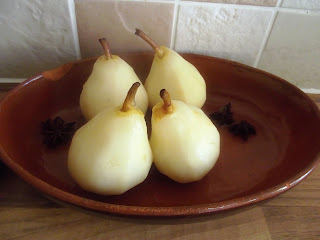 Keep the star anise for garnish.
Now melt 100g butter in a pan and add 1 packet of crushed Speculoos biscuits. Mix well and allow to cool. 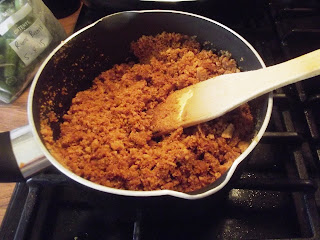 Use the sticky crumb mixture to coat the pears completely, moulding it around with wet hands.
Place them on a baking tray and bake for 10 minutes at 170 degreees until the coating is crisp.

I have to admit that the rolling and coating of the pears was a bit tricky and so a simplified ( dare I call it 'deconstructed' version) is every bit as impressive.
Serve the pears sitting jauntily atop the crumbs ( call them Cinnamon Soil if you can keep a straight face) with the syrup on the side for pouring over.


If you have biscuits, crumbs and pears to spare- layer it all up into a trifle. I sent this one to the Guardian - and it was the winning recipe. Do enjoy the editor's comments, by the way. Is anyone else reminded of The Hitchhiker's Guide to the Galaxy?

8
Trifles are made for sharing. They’re the pudding you wheel out when you’ve a horde to please. Which is why, for this swap, we threw a party. A trifle party! Eight adults and four under-threes swarmed around a wooden table laden with layers of fruit, custard and whipped cream. Everyone was armed with a spoon, and we all dove right in there. It was a delirious, cream-splattered splurge.

The winning recipe: sugar and spice trifle (pictured above)

Speculoos as the biscuit base is an inspired choice in Leftoverliz’s offering here – as festive a pud as you’re likely to get. It’s got the requisite layers of biscuit, fruit, custard and cream, the first two bringing a ripe boldness to the bland unctuosity of the latter. These poached pears, by the way, are beautiful in their own right, and the whole trifle, deconstructed, is an excellent alternative if you’re particularly anti-assemblage.
Serves 4-6
4 pears
100g sugar
400ml water
3 star anise
275ml whipping cream
250g speculoos biscuits
2 tsp sherry
500g ready-made custard
1 Peel the pears, but leave them whole, with the stalks on.
2 Dissolve the sugar in the water, add the star anise and pears, then poach for 15 minutes or so, until tender. Drain, reserve the cooking liquor and allow the pears to cool.
3 Whip the cream to soft peaks and set aside. Put about half of the biscuits in a layer in the bottom of a trifle bowl.
4 Add the sherry to the pear liquor and spoon a few tablespoons over the biscuits to make them soft.
5 Slice the pears and place half of them in a layer over the biscuits, then pour the custard over the pears. Add another layer of biscuits, reserving a handful for scattering, and then a layer of pears.
6 Top with whipped cream and a final scattering of crushed biscuits.
If you are genuinely in the mood for an unctuous pudding- try these Cinnamon Cream Pots.

Mix 2 eggs and 3 egg yolks with 25g of sugar. (The egg whites freeze well for use another time).
Bring 350ml of milk and 150ml of cream to the boil. Add 200g of crushed Speculoos biscuits and an extra pinch of cinnamon.
Pour the hot milk over the beaten eggs, beating with a whisk as you do so to form a custard.
Pour into ramekin dishes or glasses and place in a baking tray half filled with hot water.


Bake for 45 minutes in a cool oven (100 degrees) until set.
Once cooked, cool and then chill until ready to serve.


And yet more leftover biscuit crumb blends wonderfully with your usual crumble mix for a pud with warm hints of sugar and spice.


Finally- try a savoury recipe (or semi-sweet/semi-savoury at any rate). I am not a fan of goat's cheese so prefer to use a cow's milk roule like Fagotin, Boursin or le Roule for this, but I accept that the sharp tang of goat probably complements the crumb particularly well.
Get ready 3 plates - one of beaten egg, one of flour and one of Speculoos crumbs.

Coat your roules of cheese (buches de chevre, Fagotin, Boursin or le Roule) first in flour, then in egg, then in crumb and lay on baking paper on a tray.(Make sure they are fully coated.)
Bake at 200 degrees for 10 minutes until the crumb is crispy ( tap it to check).

Serve as pre-dinner nibbles or as a starter with a dressed salad.
Posted by leftoverliz at 07:08 No comments: