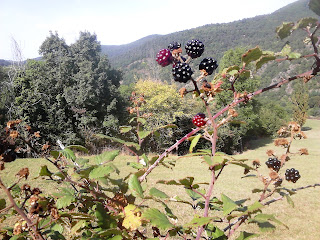 Once again it is the season of mists and mellow fruitfulness.
No more so than here in the Auvergne, where the hedgerows are bursting with autumn fruit and the little paths that wend their way round our friendly local volcano are lined with brambles begging to be harvested.
So, a few Sundays ago we braved the hunter's guns which were blasting around us and filled as many containers as we could with this free bounty.

Once we were safely home, the berries were washed and sent on the first part of their journey to become Bramble Jelly.

For each kilo of berries, you need 2 cooking apples ( cored and roughly chopped but peel still on) and 500 ml water.
Put these in a large preserving pan and simmer for 10-20 minutes until soft.
I like to give the softened fruit a quick blitz with a hand blender or mash with a potato masher, before spooning the mixture into a jelly bag, suspended over a large bowl.
Leave overnight, weighted down with a heavy tin to press out as much juice as possible.
Make the remaining juice up to 1 litre with water or red grape juice and put in the pan with a kilo of sugar.
Boil on a full rolling boil for 5 minutes and then whisk in 4g of agar agar.

Continue to boil until you have the beginnings of a set ( at 104 degrees if you have a thermometer or a spoonful placed on a cold saucer wrinkles when you press your finger through it, and leaves a clear trail.)
Pour into strerilized jars, cool, seal and label. (A litre will fill around 9 jars).
The jelly will be set by the following day.
With another 500g of blackberries, you can make Blackberry Vodka too.

Wash the berries and crush them roughly with a potato masher. Spoon them into sterilized kilner jars and cover them with either alcool à fruits (readily available here) or use vodka in the UK. Seal and leave in a cool place for at least 1 month, turning the jars every week or so.
Then dissolve 400g of caster sugar in a pan with 200ml of water, bring to the boil and then simmer for 2 minutes before leaving to cool.
Open your kilner jars and filter the blackberries from the liquid, add your sugar syrup and mix well then pour into sterilized bottles and seal.

Another couple of blackberry ideas from the blog are:

or Summer Pudding ( mine here looks a bit like The Blob!- but it is so simple, economical and lovely it really is worth a try):

Something very much more savoury, which I have been pleased to try recently, is sorrel.

I discovered a clump of it pushing its way up through the tarmac on our driveway. It's spear-shaped leaves and distinct lemon flavour are unmistakeable.

Made into a soup with a couple of potatoes, an onion or chopped leek and some vegetable bouillon it is scrumptious. Just pull the ribs from the leaves, chop them roughly and simmer with the other veg in the bouillon. Blitz before serving and add a little milk or cream if you like.

Hugh F-W makes his into a sweet tart amongst other things:
www.theguardian.com/lifeandstyle/2012/may/04/sorrel-recipes-hugh-fearnley-whittingstall

And so, my foraging comes to an end this week but, whilst the hunters blow their horns, my other neighbours are snuffling about in the undergrowth, looking for mushrooms.


Here's a selection someone found nearby:

I am not brave enough to tackle these yet- but who knows? Maybe next year. Watch this space.

Posted by leftoverliz at 10:16 No comments: