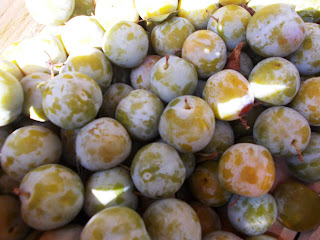 After the fruitless summer of 2017- when the late frosts of the Saints de Glace laid waste to all the blossom- this year the fruit trees in my Auvergne garden have gone, well...crazy.

My greengage tree, which in the 3 years we have been living here has only produced 4 little fruits, is suddenly and bough-breakingly laden.
What's more, they are all ripe and need to be dealt with right away.


Ho-hum, never mind about unpacking. Time to get preserving.

In addition to all the usual crumbles, pies and cakes I made pots and pots of plum relish and chutney.
There were also Clafoutis and Tatins to be made.

And, just as an experiment, I decided to make an Oriental Plum Sauce for dipping and stir fries.

I put 2 kilos of plums ( or greengages to be more precise) in the slow cooker ( stones removed),

along with 750g of white onions ( chopped), 6 fat garlic cloves, 4 heaped tsp of ground ginger, 6 heaped tsp of Chinese 5 Spice powder, 250 ml of soy sauce, 2 tbsp black treacle and  650ml of cider vinegar.
I left it to cook ( and smell delicious) for 6 hours. (You could achieve the same effect in a large pan, simmered for an hour.)

I then tipped it all into said large pan and blitzed it to a smooth mixture using a stick blender. I added 400g of dark brown sugar and 400g of white granulated and heated until all dissolved. A quick boil and then pour the hot mixture into hot sterilised bottles or jars and seal.


I have used this on stir fries (yum), also with bacon and eggs like HP sauce and last night added a dash to some sauteed Swiss Chard. It was delish.

Just as we were eating the last of the plum/greengages in a fruit salad- my neighbour called round.

"Cela vous intéresse, les prunes?" he asked hopefully, holding out a sack of 5 kilos of golden Mirabelles. Smiling gamely, I accepted ..retaliating an hour later with 3 kilos of apples surreptitiously hung over his fence as a gift.

So, it's back to the preserving pan to make Mirabelle Jelly..

just don't talk to me yet about the groaning peach trees. Give me a week.

Posted by leftoverliz at 08:37 No comments: