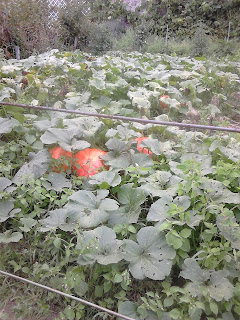 Lots of things really thrive here in the Auvergne. Swiss chard, courgettes, pumpkins.....And me, of course.

When we arrived back to the Potager, the pumpkins had taken over.
The leeks were frantically waving for help, and the beetroot, celeriac and radishes were all but in invisible under a tangle
of pumpkin leaves and runners.
Some had even made it over the fence into my neighbour's garden.

But first, this year, I thought I would try something new. starting with tackling this giant courgette:
I tried out a recipe for Courgette and Ginger Jam- and it is surprisingly delicious. The courgettes are a bit tasteless when they get to this size - so provide a good vehicle for strong flavours like ginger and lemon.

1. Layer the vegetable in a large mixing bowl, sprinkling each layer with sugar and lemon juice until the sugar is all used up.

2. Cover and leave for 24 hours.
3. A huge amount of liquid will have come out of the flesh, so drain that off into a preserving pan along with any undissolved sugar.
4. Add the lemon and ginger to the mixture and boil rapidly for 20 minutes or so.

5. Add the chopped marrow/courgette flesh and cook for a further 10 minutes until tender, skimming as you go.
6. Use a stick blender to roughly blitz the flesh and ginger into a course puree and then add the pectin.
7. Boil until your jam has reached setting point ( when a spoonful sets on a cold saucer and wrinkles up) and then pour into hot, sterilized jars.

The medium sized courgettes were made into an old favourite- stuffed with leftover bolognaise sauce and cooked au gratin in the oven:

And any other assorted overgrown veg from the garden were put together with Moroccan spices, dried fruit, chutney and tomatoes for a tagine:


Finally, I am going to use up one of the giant pumpkins to make Spiced Pumpkin Butter ( a bit like a treacle spread for toast, pancakes, waffles etc).

1. Put the cubes in a steamer over hot water and steam for 10 minutes or so until tender.

2. Place in preserving pan and blitz with a stick blender until you have a puree.
3. Add the sugar and spices, the lemon juice and zest
4. Simmer on a low heat for an hour or so until the mixture is very thick. (I am going to use a slow cooker for several hours instead.)
5. When the puree is very thick and leaves a clear channel when a wooden spoon is drawn through- it is ready to be potted up in sterilized jars.

That takes care of one of the pumpkins. My friends assure me that the rest will keep well in our cool cellar over the winter.

No chance of getting the ones back which have run away into the neighbour's garden anyway- he has placed them under armed guard!

Posted by leftoverliz at 00:34 No comments: