Since the Spring, I've been wrestling with a rocket (arugula) monster in the greenhouse- no matter how savagely I cut it back, it just keeps on growing. It's now been joined by a parsley monster and a mint monster too.

It's time to use up those leaves!

Fresh parsley makes all the difference to moules marinieres: 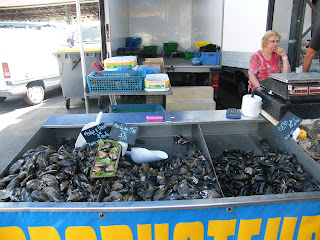 To prepare this simple but special dish- buy fresh mussels from the fishmonger, wash them in plenty of cold water and pull off their little beards (seaweed-y hair protruding from the shells). Discard any mussels which remain open despite being given a sharp tap on a hard surface and plunged back into the cold water- and any with broken shells. 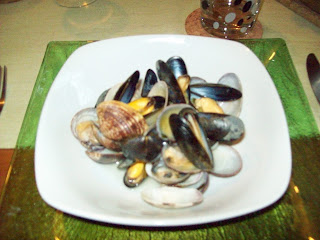 Soften a small shallot in some olive oil (with some finely chopped garlic if you like) in a large saucepan, pour in a glass of white wine and bring immediately to the boil, toss in the mussels and put on a lid. After 3-4 minutes, give them a good shake, open up the lid and if they are all open, serve immediately with lashings of fresh parsley. (If they are still shy, give them another few minutes until they are all steamed open.) Pictured above is one made with a few clams as well.

Mint and parsley go with practically everything- and mint is great just steeped in hot water to make mint tea of course.
You may not have tried mint with courgettes- but the bland flesh of the courgette absorbs mintiness really well..just braise them in a little vegetable stock, seasoning and mint until all the liquid has been absorbed and the courgettes are tender. 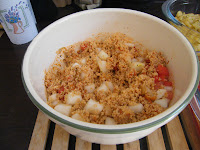 Rocket of course goes well in any salad- mixed with a variety of leaves such as watercress or spinach or lambs lettuce or added to pasta salad with tuna: 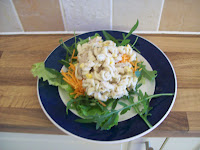 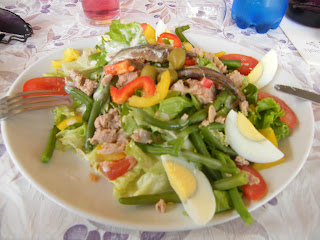 And whilst we are talking salads- my partner's favourite is a salade nicoise: leaves with tuna, egg, olives, anchovies, green beans, potatoes and tomatoes in a mustardy vinaigrette:

Fish and green leaves have a good affinity- whether it's spinach, rocket, lettuce or (one of my favourites) dill. 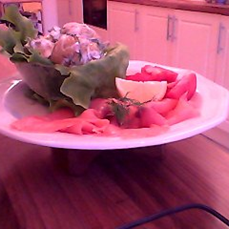 Dill is great with oily fish like salmon- here I've mixed it with mayonnaise to make a potato salad to accompany smoked salmon: 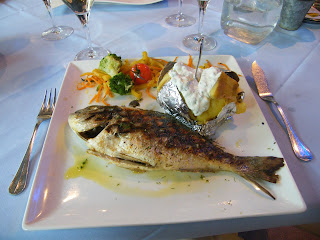 It also goes well with crushed new potatoes and butter to accompany any fish dish, or in a baked potato with creme fraiche (served here with sea bream.)

Fennel is often paired with fish- here we barbecued some trout stuffed with fennel and lemon. 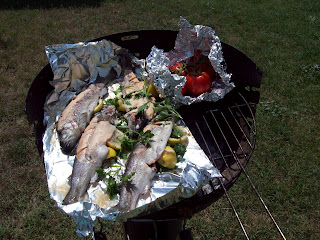 But enough of those fishy pix!

Now it's time to cut down some more of that rocket monster and dress up a salad! 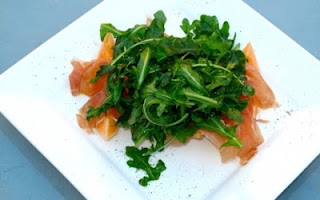