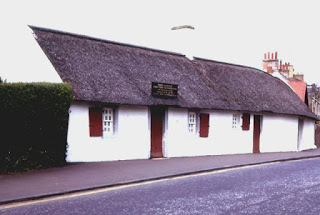 We go back a long way, Rabbie Burns and I.

I lived for many years in Alloway in Ayrshire- and spent my teenage summers working as a tour guide in Burns Cottage, his birthplace. There wasn't a lot to tour- two rooms and an animal barn- but I learned to flesh it out with detail, if there was any hope of a tip.


I wasn't hugely respectful of the Bard in those days - a bunch of us used to meet in the Auld Kirk, prop ourselves up on his father's gravestone and slurp a can of Special Brew before going to Cricket or Rugby Club discos. I don't know if Burns Senior would have appreciated that or not. Possibly.

Like I say, we're going back a long way.

I'm much more appreciative of Burns' poetry and his genius for social commentary now I'm older and I hope a little wiser. I've often found myself musing on:


'Oh wad some pow'r the giftie gie us - to see oursel's as others see us'.

It took Jean-Paul Sartre three volumes to say that. So I reckon Robbie deserves his laureate.

So here is my tribute to him- a post of Scots recipes for you, if you should be hosting a Burns Supper on the 25th January or just planning a few Scots themed meals in his honour.

As a starter, there is so much to choose from as Scottish seafood is second to none. You could begin with smoked salmon with soda bread:

This is one of the easiest breads to make and is delicious with salmon or a crumbly cheese. Just mix 225g of granary or wholemeal flour, a pinch of salt and 1 tsp of bicarbonate of soda in a bowl. Add a small pot of natural low fat yoghurt made up to 200 ml with some skimmed milk. Mix to a soft dough, form into a bun and place on a lightly greased tray. Make a deep cross in the top and I like to then press some pumpkin seeds and rolled oats into the surface. Cook it in a hot oven (200 degrees) until brown and crusty (30 mins or so.)

Kipper pate would go well with this too- cooked Scottish kippers, cooled and blitzed with juice of half a lemon, a good grind of black pepper and half a small tub of low fat cream cheese.

A more substantial starter would be Scottish mussels cooked a la mariniere. This is a simple dish, and fresh mussels are in season in January too.


Just wash the mussels in several changes of water, rub them with a scouring pad to remove any grit  or seaweed. Pull off their little beards and rinse them again. Do not use any which are damaged, or remain open when scrubbed.

Soften a chopped onion in some olive oil in the bottom of a large heavy pan, add half a bottle of dry white wine and bring to the boil. Throw in the mussels and put on a lid. After 4-5 minutes, take a look- if they are all steamed open, throw in a handful of parsley, give them a good stir and serve in bowls with bread and napkins for messy fingers!

If you don't like fish, then Cock-a-Leekie soup is a good starter. Poach a small chicken or 3 chicken legs in water. (4-5 hours in a slow cooker, 45 minutes to an hour on the hob). 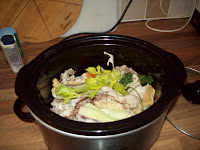 Remove the legs and take off the meat, then shred it. Skim the clear stock and then set it to simmer with half the chicken meat back in and 2 shredded leeks.

When the leeks are tender, serve the soup with the remainder of the shredded chicken as a garnish. (It is traditional to garnish with prunes too.)
The soda bread goes well with this too!

Now for the main course- that 'great chieftain of the puddin'race' - the haggis.

Haggis is widely available in supermarkets- either whole or sliced. It can be microwaved very successfully (or boiled according to the butcher's instructions.)
It is traditionally served as a trio- haggis, bashed neeps and champit tatties (mashed swede and mashed potato.)
It's difficult to make this look good- as it is basically three dollops- but I liked this presentation idea from the Visit Scotland website:


I'm playing around with texture this year and am serving my haggis on Friday fried in slices with a side of roasted root veg (most notably swede and potato of course, but also onion and carrot and maybe sweet potato as these are all in season.)

Leftover haggis is lovely re-fried and added to a green salad, perhaps with some lardons or even a poached egg.


For dessert, pears are still good in the shops- so why not a pear and oat crumble? Or poached pears with some whisky cream (cream with a drop of whisky whisked in).


You could make a whisky trifle, with a very little whisky soaked into the trifle sponges instead of sherry. (Leave off the strawberry garnish- it's January!)

But how about this for the piece de resistance- a  sticky marmalade and whisky cake (maybe served with some heather honey ice cream.) Both my shortbread and ice cream recipes are in the July blog if you want to make your own incidentally.

The cake is made from 175 g self raising flour, 175 g of butter or margarine, 175 g of caster sugar, 3 eggs, a pinch of salt, 1 tsp baking powder and 3 tablespoons of chunky marmalade. (Good for using up sticky jars of marmalade that are half empty.)


Cream the butter and sugar until pale and fluffy, add the beaten eggs, mix in the flour, salt and baking powder, then the marmalade and fold together until well mixed. Pour into a greased and lined 20 cm cake tin and bake for 50 minutes or so in a medium oven (180 degrees), until a wooden skewer comes out clean when inserted into the top.

Allow to cool for 30 minutes or so, then spike the top with your skewer. Boil together a capful of whisky, 1 tsp of marmalade and 2 tsps of icing sugar. Pour over the warm cake and allow to seep in and drip down the sides.

I can guarantee that you will be neither wee nor sleekit after this pud! 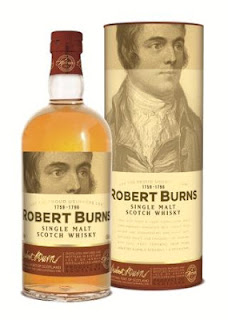