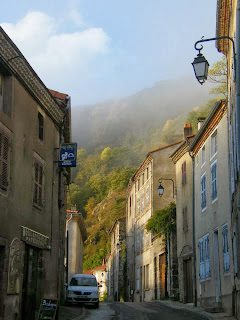 There are places that everyone says are 'the place to be'- Paris in the springtime, New England in the fall.

Forget all that. The place to be in the autumn is the Auvergne in Central France.

We've just got back from a glorious week in the Gorge d'Allier - and gorge we did on the hearty food, beautiful scenery and sensational autumn colours.


People in other regions of France laugh at Auvergnat cuisine: too heavy, peasant food, all meat and no vegetables. Nothing could be further from the truth.
OK- the portions are ample (I didn't manage to finish my main course in all 5 of the restaurants we ate in- and you know I would do anything not to waste food) but the flavours were delicious, the combinations of vegetables showed care and attention from the cooks and the rustic authenticity of the dishes contrasted very favourably with 'tourist menus'elsewhere.

The Allier river is full of trout and salmon (there is even a salmon museum in Brioude), the le Puy volcanic area is famous for its delicious green lentils (much lauded by chefs over here), nuts and dried fruits,  and the whole region is famous for its dairy products- St Nectaire cheese, Bleu d'Auvergne, le Fourme, Cantal etc

As for vegetables- the Auvergnat motto seems to be- stuff 'em. We had stuffed cabbage, mushrooms, tomatoes, courgettes....cuisine very much after my own heart, as you'll know if you follow the blog. We were never served a plain vegetable- they were all embellished with stuffing, sauces or baked in a gratin with cream and cheese!

As a tribute (but rather pale imitation of the lovely food we ate), this week I've prepared an Auvergne inspired menu: terrine of vegetables, prunes and nuts with a rich mushroom sauce for starter, then salmon on a bed of creamy lentils and cake aux myrtilles (blueberry sponge) for dessert. No stuffed vegetables this week- sorry, if you were hopeful!

On our first night we ate in a restaurant in Clermont Ferrand- the largest town in the region. I opted for the terrine du jour as starter and it was quite simply one of the best dishes I've tasted in a long while. I asked the waiter what was in it- and he listed swiss chard, cream, prunes and nuts. To my surprise, it was served hot with a thick coating of creamy mushroom sauce- a bit like a sauce diane.
I tried to recreate it at home, using the vegetables I had to use up in the veg drawer. I made a puree of courgettes and creme fraiche,  added some chopped spring onions, some chopped nuts and prunes (I used tinned). I beat in two eggs and some seasoning. I lined a loaf tin with wilted spinach and poured the mixture in.


I then heated the oven to 170 degrees and cooked the terrine in a bain-marie for 30 minutes or so until it was firm to the touch. 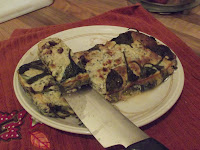 The result was tasty- for a first attempt. Next time I would use leeks to wrap the terrine as the spinach was a bit wet, and would separate the eggs, beat them and then fold them into each other like a souffle. Watch out for the improved version on the blog one day.

The main course is one of my store cupboard stand-bys: salmon with creamy lentils.

I had some leftover mustard cream sauce from the previous day- but it's simple enough to make some as and when you need it.
Soften some leeks or spring onions in butter and add a splash of white wine. Boil to remove the alcohol and then add a tablespoon of  coarse grain mustard and 2 tablespoons of creme fraiche. Stir in a tin of rinsed lentils and keep warm.
Poach or microwave a salmon fillet per person, lay on top of a bed of creamy lentils. Simple, quick and very delicious.

Lastly for dessert, I made a blueberry cake (actually I made two versions as you will see). Blueberries were everywhere in the Auvergne. The hardy bushes sprouting out of rock faces below us as we picnicked- just out of reach without ropes and harnesses! It was the same for walnuts and hazelnuts- crunching under foot as we walked along tracks. No wonder they featured everywhere on restaurant menus.
On my return home however, the only ones I could find were from Greece! Come on, supermarket guys! There must be local ones around in the autumn.
Anyway- simple sponge with blueberries (rolled in flour to stop them sinking) dropped in and a bit of vanilla sugar sprinkled over the top, baked at 190 degrees in a loaf tin and served warm, sliced with some cream. Lovely!

However, I also poured a tiny bit of the mixture into ice cream cones (1/3 full at most). These baked alongside the cake and made a cute cupcake to serve with cream or ice cream (or a swirl of whipped cream on top Mr Whippee style would be good.)
This ice cream cone idea is great- try it with chocolate sponge mix and frosting too.


So, my interpretation of a regional Auvergne menu. I've got lots more ideas too, inspired by my visit (admittedly mostly involving stuffed vegetables..) so watch out for Menu Auvergnat II- just when you thought it was safe to open the salad drawer! 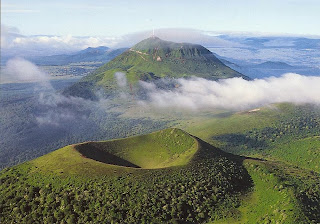