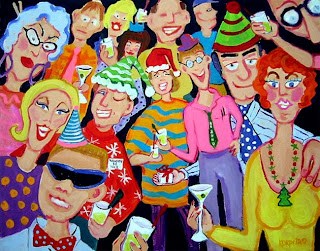 Usually, when you think about 'the next day' - all that remains is a thumping head, a churning stomach and a vague sense that you said or did some rather regrettable things.

On my team, we celebrate twice- an evening at the pub which, yes, has the potential to lead to all of the above (and I do believe in always fulfilling my potential)- and a lunchtime buffet where everyone brings a dish and we all have a jolly nice lunch.

The only problem with the latter is that everyone contributes really generously and there is always lots of food left over. It seems criminal to go round with a black dustbin bag and throw away delicious food because people have been kind enough to make it or buy it, but have been too restrained to eat it all up.

For this week's blog menu, I took pity on the carrots which had been sliced up to go with hummus and dips, the nuts and dried fruits which some health conscious member of the team had laid out - only to be snubbed in favour of Stollen, mince pies and cheesecake-  also the cocktail sausages which went largely ignored ( as always, on a team of mostly vegetarians and people from faiths which don't eat pork) and a huge Panettone which sat disconsolate and forgotten like the plateau of Sir Arthur Conan Doyle's lost world.

I made a nut terrine (like a nut roast but somehow less virtuous), followed by a spiced sausage and bean stew and a caramel bread and butter pudding.

For the terrine- put whatever you have in the way of dried fruit, vegetables and nuts into the goblet of your food processor. I had  carrot sticks, apricots, dates, brazil nuts and walnuts. Pulse to a fine chop.
Meanwhile, toast some pine nuts in a pan until just coloured. Be quick. Don't let them burn.
Similarly soften some onion and some garlic in some olive oil.

Mix everything together in a bowl with some soft breadcrumbs, some grated cheese, some grated nutmeg, salt and pepper and allspice and 2 beaten eggs.
Pour into a well greased loaf tin and bake at 180 degrees until golden and a skewer inserted into the middle comes out clean. (About 20 minutes).


Main course again requires some onion softened with garlic in a frying pan. Add the cocktail sausages and heat through. Next add a carton of chopped tomatoes with added chili (or add the chili yourself), a dash of Worcester sauce, a dessertspoon of black treacle (or muscavado sugar), a dessertspoon of balsamic vinegar and a tin of butter beans (drained). Refill the tin and add the starchy water to the pan. Bring to a bubbling boil then reduce to simmer.

When the liquid is thickening, pour into a gratin dish, top with fresh breadcrumbs and place in a hot oven (200 degrees) until the breadcrumbs begin to turn golden - abut 10 minutes.

It made a great huevos rancheros for supper the next day too.

For dessert, I sliced the Panettone and laid one layer in a gratin dish.I spread caramel sauce ( or dulce de leche) over this layer. Next layer went on until the dish was full. I mixed two beaten eggs with 200 ml of milk and a dessertspoon of vanilla essence. Pour the custard over the bread and press it down until the bread is pretty much submerged. I didn't sweeten the egg custard as the caramel sauce is very sweet, as is the Panettone and -oh dear- I sprinkled vanilla sugar over the top before it went into the oven as well.


Bake at 180 degrees until golden and between mostly firm at the sides and wobbly in the centre. (Think dancing at the office party unrestricted by Spanx).

When serving you can give the top some added crunch by finishing with a blowtorch.

Even though I say it myself, this was a fab meal made from stuff that was destined for the bin.

Enjoy your Christmas break! I know I will.