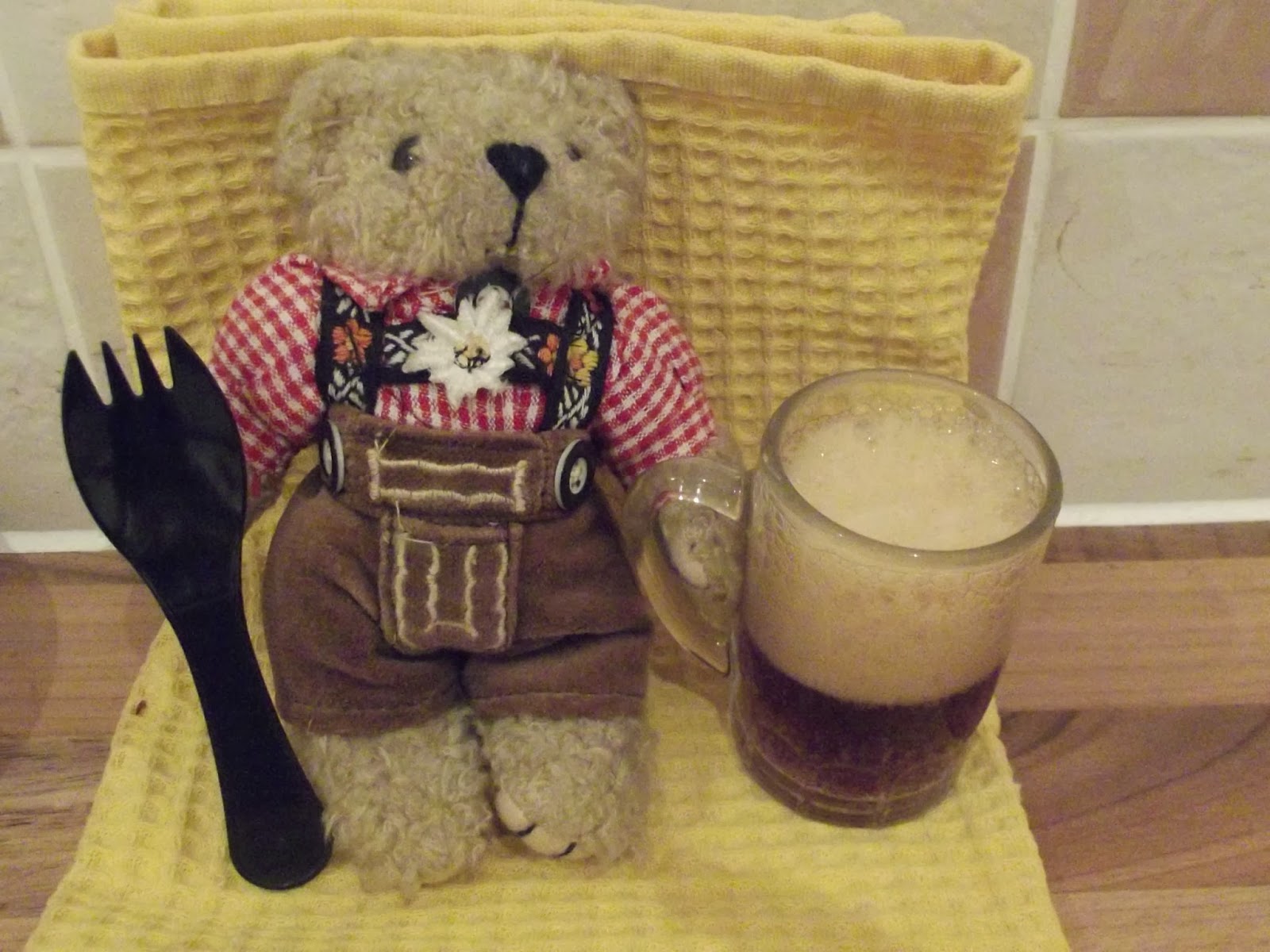 Actually, it's more of an Austrian/Bavarian bite- but that wouldn't have made such a good pun. And in fact it's not even that good a pun - unless you follow the shipping forecast...you know, Cromarty, Forth, Tyne, Dogger, Humber, Fisher, German Bight...

Moving on..(as Ronald Reagan once said: 'If you're explaining, you're losing'- wise words if you're telling a joke, although less so perhaps if you're heading up a world democracy.)

Anyway, the whole blog is a bit of a cheat this week.

Firstly, although it's three courses - two of them are puddings. And secondly, those puddings
are cheat's versions of the German classics.

It is Week 50 after all, so I hope you'll cut me some slack here.

This week's menu is Wiener Schnitzel, followed by a choice of Cheat's Strudel or Black Forest Express.

Let's start with the puddings.

The Black Forest Express (BFE) uses leftover chocolate cake or muffins (good if they are going a bit dry and need using up), a pot of chocolate mousse, some 'fruits of the forest' (either tinned or frozen), a bit of booze and a chocolate flake bar.

Slice your cakes into three discs- I used choc chip muffins. Spread each disc with chocolate mousse.
Bring your fruit up to a simmer in a pan with 1/2 cup of water and a dash of kirsch or creme de cassis or even port. Strain the juice into a jug.
Now layer up your BFE in a glass or sundae dish- one chocolate cake disc topped with a spoonful of fruit, then the next and so on. When the tower is complete, pour over the syrupy juice and allow to soak in.
When ready to serve, top with whipped cream and the crumbled flake bar.

Et voila- a walk in the Black Forest- or at least a quick jog.

The Strudel is equally quick- although does require a bit of cooking.

I had leftover mincemeat and apple compote to use up- but you can put whatever fruit you like in a Strudel eg. leftover fruits of the forest from your Black Forest Express above, or peach and mandarin...up to you.

The mincemeat was a Christmas present from a friend so I give it star billing. The recipe will feature on the blog soon (when I can prise it out of her)- but she hinted that it contains crystallized fruit rather than candied fruit and nuts as well as all the usuals. Delicious!

For the strudel pastry, I use spring roll wrappers. Lay out the wrapper, spoon on your filling, then close it up any way you want- like an envelope, or a spring roll, or a samosa or a cigar. Then double wrap it in another square of  spring roll pastry. Seal the edges by brushing with water to make them sticky. then place on a well greased baking sheet and brush with melted butter or Flora.

Bake at 200 degrees until golden and serve sliced with icing sugar sprinkled over and cream or ice cream.

Finally, onto the main course. This I have tried to cook authentically. I've used rose veal which is humanely reared and slaughtered and although it can be expensive - a little piece goes a long way.

I bought mine from the butchers and it had already been tenderised and flattened into a large fillet (which I cut in two).

I laid out three dishes of flour, beaten egg and breadcrumbs (the latter I always keep in the freezer and top up whenever I have leftover crusts or slices of bread).

First dip the meat in flour, then egg, then press into the breadcrumbs until well coated.

Heat a teaspoon of vegetable oil in a frying pan and fry the schnitzels for a few minutes on each side until the breadcrumbs are evenly golden.

Serve with a good squeeze of lemon and a green salad.

So, I hope you enjoyed my brief foray into German classics.
Next week, as I need something to fire my depleted imagination and keep me going to the end of the 52 weeks, I'm going back to cookery class for some inspiration.

Expect some interesting stuff- although possibly not cooked by me, as I think it may be mostly cooking demonstrations.