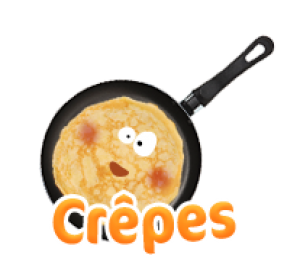 February 2nd is Candlemas- known in French as 'La Chandeleur' or 'la fete des crepes'. It falls on the 40th day after Christmas, and is richly endowed with traditions and superstitions.

For example, it is said that if you warm a coin on top of your pile of pancakes and then wrap it up and put it in your wardrobe - it will bring your family prosperity throughout the year. Shame I only read about that one after we had eaten our stack of pancakes.


It is also said that if it rains on Chandeleur, it will rain for 40 days afterwards. I can't really see that happening here in the South of France, and anyway luckily it was a bright and breezy day.

We spent the day hiking in the Calanques so were hungry for our pancakes by the evening.

I made one of my favourite pancake dishes - originally one of Raymond Blancs: Pancakes with Spinach, Mushroom and Emmental.

You need a bit of time for this- but it's worth it. There are four processes: making the pancakes, making the filling, making a cheese sauce - and baking it all in the oven.

For the pancakes you need:

1. Sift the flour and salt into a bowl, make a well in the centre and pour in the milk and beaten eggs.
2. Mix well with a whisk and then add the oil. The mixture should resemble pouring cream.
3. Heat a drop of oil in a sturdy frying pan and fry ladlesful of the mixture, swirling to cover the bottom of the pan and turning over as soon as they start to brown underneath.
You should get at least 8 pancakes from this mix.

1. Wash a large bag of spinach thoroughly and pull off any coarse stalks.

2. Place the wet spinach in a large pan and wilt down quickly.
3. Drain, pressing hard with a large spoon to get most of the moisture out- then wrap your spinach in a teacloth and squeeze as hard as you can to get all the remaining moisture out.
4. Fry 50g of  chopped mushrooms in a little oil and then add to the spinach mix, working the two together well with a little cream or milk and seasoning with lots of salt, pepper and nutmeg.


For the cheese sauce:

1. Melt a tablespoon of butter in a saucepan and add 1 tablespoon of flour.
2. Cook for a little while until it forms a soft ball, then add 350ml milk, lots of salt and pepper and a teaspoon of mustard.
3. Bring to the boil, whisking all the time until you have a thick white sauce.
4. Shoot in 200g grated emmental cheese and allow to melt.

Butter a gratin dish, rub it round with a cut clove of garlic and preheat your oven to 200 degrees.

Now, assemble your dish- a tablespoon or so of filling in each pancake, roll each one up and place in the gratin dish,
pour over the cheese sauce, sprinkle on a little more cheese and bake until golden and bubbling (about 20 minutes).

This needs nothing more than bread to mop it up, and a crisp white wine such as the lovely Cassis white wines we have here.

The leftovers were equally good next day with a salad.

As it was Pancake Day in France- and soon to be so in the UK- I thought I'd add here some of my other favourite pancake ideas to maybe inspire you to try something different.

Crispy pancake rolls are everyone's favourites - and we had ours this week served with a noodle and vegetable salad..

If you want to make your own pancake rolls, it is very simple and the recipe can be found here on the blog. http://lizsleftovers.blogspot.fr/2013/02/week-2-chinese-new-year-frugal-feast.html

(I bought mine this time round!) I'm focussing on the salad though: a warm noodle dish, with lovely fresh salad ingredients from the market, like these wonderful radishes:

Cook the noodles until tender, drain and whilst still warm, mix with 1 tablespoon of peanut butter, 2 of chili sauce, 3 finely chopped spring onions, 1 pepper (finely chopped), 4 big radishes (blitzed in the food processor) and 2 carrots (grated).
Season well with soy sauce and then serve on a bed of lettuce, with the pancake rolls and a tablespoon each of blitzed peanuts and radishes as a garnish.


Some of my other favourite pancake recipes are here:

I had these sweet rolls in a sushi restaurant a few years ago (see pic)- and adapted the idea using sweet pancakes instead of bean curd ones. They make a fun dessert- especially served with chopsticks and little sweet dipping sauces. I make them when I have leftover rice pudding, as they are essentially rolled pancakes, filled with coconut rice pudding and fruit puree and served sliced sushi-style.
Pancakes:
50g plain flour
1 egg
150ml milk
1tbsp flavourless vegetable oil
pinch salt
1. Sift the flour and the salt, make a well in the centre , add the egg, milk and oil and whisk vigorously until the mixture resembles pouring cream.
2. If you can, leave the mixture to rest in the fridge for half an hour or so
3. Fry ladlesful of the mixture in a hot frying pan until you have a stack of 4-6 pancakes
Rice pudding:
50g short grain rice
200ml coconut milk
110ml milk
zest of one orange
2tsp sugar
1tsp vanilla essence
1. Place all the ingredients in a heavy bottomed saucepan and bring to the boil.
2. Stir well. turn down the heat and simmer for 45 minutes-1 hour until the liquid has all been absorbed.
3. Leave to cool with a lid on- to keep the mixture moist in the steam.
Now assemble your maki-
Lay a pancake on a flat surface, spread generously right to the edges with rice pudding, add a stripe of fruit puree down the centre (apple. blackcurrant, mango or raspberry- or a selection of colours to look pretty), roll up tightly, slice into rolls and serve standing to attention, with the cut side down.
Leftover puree makes pretty dipping sauces on the side - or go mad and have chocolate sauce or syrup or cream instead!

Classic French savoury galettes are made with buckwheat flour- and topped with whatever you fancy. I've topped mine with scrambled egg, bacon lardons and tomatoes for a full English.
For the batter:
Sift together 50g of buckwheat flour, 100g of plain flour, a pinch of salt and a a tsp of baking powder into a bowl. Make a well in the centre and add 1 beaten egg, 80g of melted butter or margarine and 185ml of milk. Mix well until you have a creamy batter.
Heat a frying pan with a spritz of oil and pour in a ladleful of the batter, spreading it out with the back of the ladle until it covers the bottom of the pan very thinly. These crepes should be lacy in texture.
Flip over with a palette knife and cook evenly on both sides.
Place your filling in the middle and fold the sides in to form a square.

But of course, sometimes pancakes are best just served with sugar and lemon! 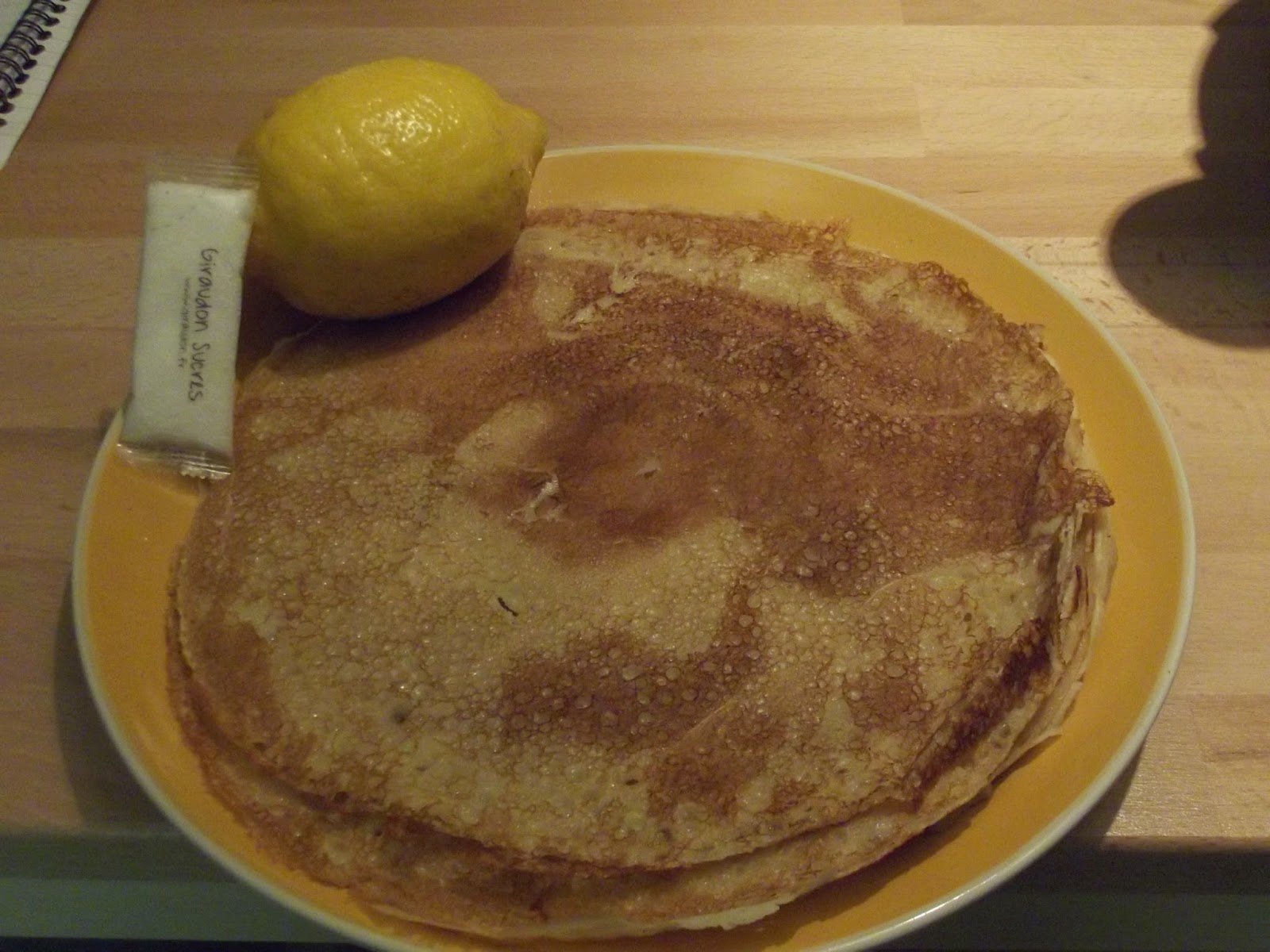 And wouldn't you just know it - I forgot to put that coin on the top again!
Posted by leftoverliz at 02:58