We've just got back from a long wet weekend in Wales. And when I say 'wet' that doesn't really say it strongly enough! Once I'd dried out, I had to think about cooking- and then I had to think about blogging.  I was without inspiration for both- but luckily a follower had emailed me this recipe which I'm delighted to share.


"Something I did get up to on Saturday, though, was to make my own toasted muesli. It's a really good way of using up the leftover ends of bags of things, so I took some pics for you (attached, bit blurry, sorry) if you wanted to blog the recipe. 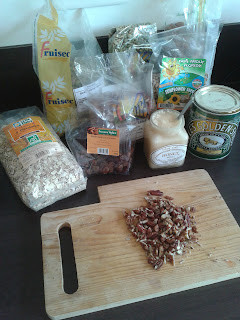 Here's the recipe I used, cobbling together ideas from the internet. It makes about 6-8 servings:
400g of mixed nuts, seeds and dried fruit.
I used 75g almonds, 75g pecan nuts, 75g pistachios, and handfuls of sunflower seeds, pinenuts, pumpkin seeds and sultanas.
I cut up the bigger nuts but left the smaller ones whole.
250g of rolled oats
150g mix of honey and golden syrup
1 tbsp flavourless oil (I used grapeseed)
First, you cut up the larger nuts and mix them with the seeds, fruit and oats in a big bowl. If you like soft muesli then you could just stop now, and store the mix in an airtight box. 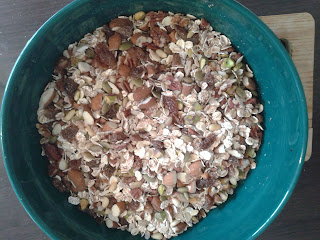 For crunchier muesli, heat up the honey and golden syrup with the oil, until the mixture is nice and liquid. I made a bit too much so mine turned out a bit sticky - 150g should be enough. 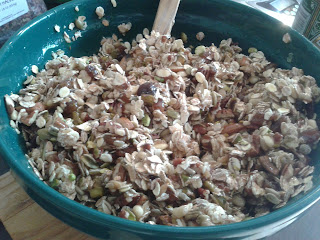 Add the honey mixture into the dry ingredients and stir until thoroughly coated. 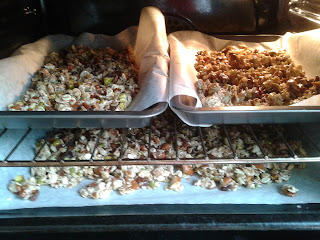 Spread out thinly on a baking tray covered with greaseproof paper; bake in a warm oven (160-170°C) for around 30 mins, turning occasionally to avoid burning. 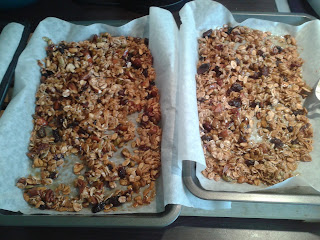 Take the trays out of the oven and leave to cool a little. Transfer to an airtight jar for storing. We ate it with cold milk for breakfast, and also sprinkled over fromage frais for pudding."

This has inspired me to think about other recipes for using up nuts from the store cupboard (as they really don't keep for long).

I'm making a plum crumble tonight and will mix some nuts into the crumble topping. Any other nutty ideas out there?