Sorry about the Olympic pun- but expect plenty more of them as the London Games approach!

Anyway, duck was on special offer at the supermarket this week- and so it was time for some beak-to-wingtip eating.( My version of  the highly fashionable nose-to-tail eating ).

I began by slow roasting the duck in the crock pot (see Cheap cheep! blog from March)- only difference is that I added vermouth to the cooking stock, as it is my current favourite ingredient with duck. This made a succulent roast dinner with about half the breast meat.

I stripped the carcass of the remaining breast and leg meat and made a duck and lentil salad:- 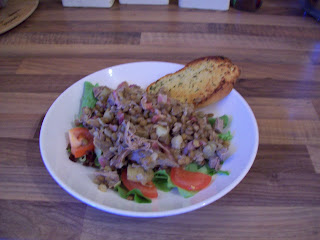 An onion (and a touch of garlic) softened in some olive oil, some bacon lardons added to the frying mix, then the duck meat, a  tin of green lentils (drained and rinsed), some leftover chopped new potatoes (or whatever veg is hanging around- carrots, leeks etc). Allow to cool until just warm, arrange some salad leaves and tomatoes in a dish, toss the lentil mix in a good mustardy vinaigrette (made with red wine vinegar preferably) and serve with garlic bread.

I put the carcass in the crock pot with some water, salt and two bay leaves and let it cook down to a nice stock over the next 5-6 hours.

I drained off the stock (most of which I'm going to freeze for another time) and then took the last meat off the softened bones for a Duck Chow Phan (see February blog for the recipe).

We had a vegetable stir fry earlier on in the week - and I kept back two three tablespoons of the beansprout and vegetable mix to experiment with making my own spring rolls to accompany the Chow Phan. 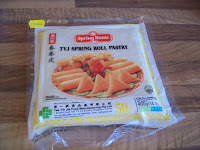 I had bought some spring roll wrappers at an Asian supermarket in Brighton last weekend- and thought they would provide a good way to use up leftovers- not just stir fry and Chinese-y bits though. (Coincidentally, a blog reader told me about how she had put Irish stew in wrappers and had them for a leftover supper- and I thought that was inspired!)

My own first attempt turned out well- once I'd mastered the technique of rolling the little beasts. Youtube proved invaluable here:http://www.youtube.com/watch?v=3Abqjo5A7rI 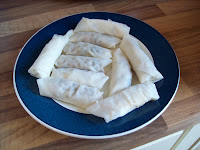 Just remember to keep the remaining pastry damp (like filo) with a teatowel over it as you roll each one. I ended up with a little pile of reasonably roly-polys.

And here they are- fried and served with the Duck Chow Phan: 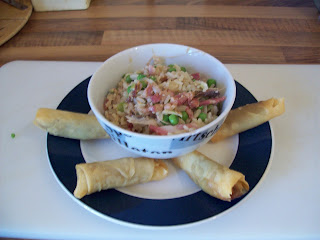 Not bad for one little bird ( and the duck did well too.)