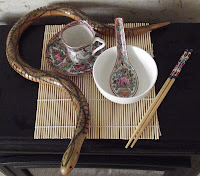 What do you think the year has in store?

Snakes are notoriously duplicitous creatures - and the horoscope from Chinese Feng Shui experts for this year is that it might be good but it could be bad.


Thanks guys- all bases covered.

Time for a feast to celebrate the coming of the New Year- but we don't want it to be too extravagant as we now know that we don't know what the future holds.

I'm also aware that some of you in other parts of the world have difficulty obtaining some oriental ingredients, so I've chosen dishes which are easy enough to make with store cupboard substitutes.

For the soup, I made a clear chicken stock the day before using a chicken carcass, leeks and celery. I stripped any remaining chicken from the bones to use in the soup.
I put the clear stock on to simmer and added 2 tablespoons of soy sauce, a dash of rice wine (or cider) vinegar, 2 tsp brown sugar and a finely diced chilli (or 1/2 teaspoon chilli flakes.) You can make it hotter and spicier to your taste. Into the soup, add 2 finely chopped spring onions, and some fine julienne of red or green pepper. Using a vegetable peeler, shave fine curls of carrot into the soup. Add the chicken and a handful of raw spinach (or bok choi or kale).
Spoon the hot soup into bowls and add 2-3 cooked peeled prawns per person.

For Chow Mein- again, I made it the day before and then quickly refried it in a wok when ready to serve. I did this because I wanted part of the noodle/beansprout mixture to fill my spring rolls.

Chow Mein couldn't be easier- fry a finely chopped clove of garlic and one onion in a little oil in a wok. Add vegetables of your choice- peppers, mushrooms, spring onions. If you want to make a chicken or beef Chow Mein you can add these at this point. Don't reheat any dish containing prawns though-serve these then and there.

Add a pack of fresh beansprouts (or a tin) and fry until soft (3-4 minutes). Sprinkle on 2 heaped teaspoons of Chinese 5 Spice powder (the 5 spices are cinnamon, cloves, black pepper, star anise and fennel seed so you can make your own if it is hard to find.) Now add 2 tablespoons of soy sauce. Moisten with a cupful of leftover gravy or stock. Soften two nests of medium egg noodles in boiling water, drain and add to the wok. Toss in the sauce until everything is fully amalgamated. Add more soy sauce or black pepper to your taste.

Put about 2 cups of the Chow Mein mixture to one side and allow to cool. This is your spring roll filling. 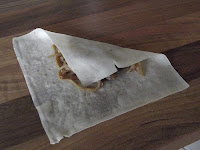 To make spring rolls (nems) you need won ton or spring roll wrappers which I bought at a Chinese supermarket - but as I plan to bake these as a healthier option rather than deep-fry them, you could easily substitute filo pastry instead.

The wrappers should be about 15 cm x 15 cm squares.Moisten these with water all over using a pastry brush. Place a heaped dessertspoon of filling in each one.

Fold over one corner to cover the filling. 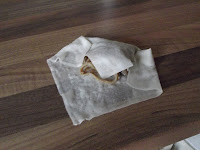 Then fold in the sides, like doing an old fashioned nappy.


Finally roll up, and place on an oiled baking sheet, (covered with a damp tea towel until you are ready to bake).

Bake at 200 degrees for about 10 minutes until golden and then serve with dishes of soy sauce and ginger, or chilli sauce for dipping.

The next dish- slow cooked sweet and sour pork- is even easier!
I've used cubed pork shoulder steaks which are really inexpensive- but worth marinading overnight in a little sherry or sweet dessert wine before cooking. Allow 1 per person or 100g.

Fry the marinaded pork cubes briefly to brown them and place them in the slow cooker (or casserole dish) with 1-2 sticks of celery, chopped into 1 cm 'smiles', 1 red pepper- roughly chopped, 1-2 carrots in batons, 1 tin of pineapple chunks in juice (put 'em in juice and all), 1 cup of tomato juice or passata diluted with water to a similar consistency (you will need more liquid if you are casseroling rather than slow cooking), 1 tbsp rice wine (or cider) vinegar and 2 tsp of brown sugar.

Serve with the Chow Mein and egg rice (boiled rice with strips of omelette mixed in.  I don't fry it- it's healthier and not necessary.)

So, there you have it- my frugal February feast. It needs a bit of planning in advance- but the dishes are simple and easy to put together once the prep is done.

There won't be many leftovers- but they are just as nice eaten cold for your lunch box if there are any. The spring rolls freeze well too once cooked.

This much I know to be true!

Kung Hei Fat Choi (from me and the snake!)