Pancake Day and Valentine's Day within two days of each other- without doubt an excuse for some good eating.

February 14th is the day to feel the love- and I don't mean all that schmaltzy stuff with red roses and teddy bears- but just the appreciation of loved ones..far or near, with us everyday or sadly with us no more.

It's time for some care, some affection and some comfort.

As usual, I like to say it with food.


For my last two outings, I've been to the Middle East and the Far East (not literally of course... the furtherest East I've been recently is Hastings). So I thought it was time to go West.

My menu this week is Leek and Watercress Soup, Chicken Maryland and Lemon Tart.

Leeks are in season still (watercress is pretty much available all year round from many UK growers and anyway I got a big bag for 20p at the supermarket so couldn't resist!).
This entree is simple and healthy, and gives a warm glow to start the meal:

Soften 2 leeks in some vegetable oil, add 1 litre of chicken or vegetable stock and bring to the boil, stir in the contents of a bag of watercress roughly chopped and let it wilt. Blitz to a smooth mixture and adjust seasoning to taste. You can add cream or milk to make it more velvety if you like.

I wanted to make my own version of Chicken Maryland- which isn't really Maryland-esque at all as the chicken is roasted not fried and I've substituted sliced parsnip for the fried banana. I also love to serve this with sweetcorn pancakes. So I've got a nerve calling it Chicken Maryland- but at least it does contain chicken and in the current 'food scandal' climate that makes me more honest than many!

Roast your chicken anyway you like it- I do mine in a cupful of water in a casserole dish so it poaches as well as roasts and makes lots of gravy. I squeeze half a lemon over it and put the squeezed half inside the cavity. Plenty of salt and pepper on top and then roast for 1 hour or so (depending on your chicken) until it is golden brown on top and a skewer inserted into the thickest part of the leg comes out clean, with the juices running clear out of the puncture hole.

For the parsnips, par-boil in boiling water until beginning to soften. Drain and pat dry. Heat a tablespoon of oil and a knob of butter in a frying pan and fry the parsnips on one side for 5  minutes and then turn and fry until golden on the other. You can add honey or maple syrup to them as they fry if you aren't counting the calories.

For the sweetcorn pancakes- make a thick batter mix from 1 cup of plain flour, 1 cup of skimmed milk, 1 pinch of salt and 1 egg. If the batter is too thick, loosen it with a little milk or water but you don't want it as runny as for crepes. Mix in 1 tin of sweetcorn and I like to add a chopped spring onion or you could add a chopped red or green pepper if you like. 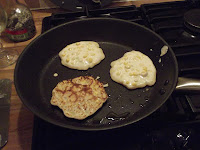 Heat a teaspoon of oil in a pan until very hot, then place a tablespoon of pancake mixture at a time into the pan. Brown the fritters on each side and keep them warm as you fry batches.


Serve the roast chicken with parsnips, sweetcorn pancakes, a jug of gravy made from the chicken juice and some green vegetables.

For pudding I've chosen to make a lemon tart - as the shops are awash with lemons at the moment for Pancake Day.

Line a 20cm x 2cm flan dish (for a small tart) with shortcrust pastry and bake blind until starting to become golden. (You can make a bigger tart by adding 1 more lemon and 1 more egg plus a little more cream to the recipe.)
Grate the zest from two lemons and squeeze the juice. Combine the juice with 2 beaten eggs and 200 ml of double cream.
Pour into the tart case and bake at 170 degrees until the filling is set- about 25-35 minutes.
Allow to cool and eat with fresh or stewed fruit.


You might need a bit of a rest after a comforting meal like that one- but, when you're ready, there's plenty to be done with the leftovers.

With some of the chicken, I made a Chicken, Leek and Bacon Filo Pie- a really easy after-work supper. Make your filling with the leftover chicken, some cooked leeks and a rasher or two of grilled bacon moistened with leftover gravy. Lay in a pie dish. Scrunch up some sheets of filo pastry and arrange over the top. Bake until crisp and golden in a hot oven (15 mins or less).

Obviously, with any leftover parsnips you can make a velvety soup - blitzed in chicken or vegetable stock with a dessertspoon of curry paste added in- but we've had a lot of soups on the blog recently.

So, I decided to make a Parsnip and Leek Tarte Tatin. How difficult could it be?

Well, not difficult at all as it turns out. All you need is a frying pan that can go in the oven too- ie. without plastic handles that melt. (Who would do such a silly thing? Look back at past blog posts if you don't know.)

I sliced the parsnips and leeks into equal sized chunks and cooked them for a few minutes in the microwave to soften (or simmer in a pan of water). I heated up 3 tablespoons of balsamic vinegar (but white wine vinegar would be fine) with 1 tablespoon of sugar and boiled it until the mixture became syrupy. I then arranged the parsnip and leek rondelles in the pan and wedged some black olives into any gaps. I placed a layer of ready rolled puff pastry over the top, tucked it in at the sides and baked for 30 minutes or so in a hot oven until golden on top.

Take care when removing the frying pan from the oven- the handle is uber-hot.

Allow to cool for a few minutes and then place a large serving plate over the top- turn out quickly and be amazed at your own skill!


Say it with flowers? Parsnips and leeks say it so much better! 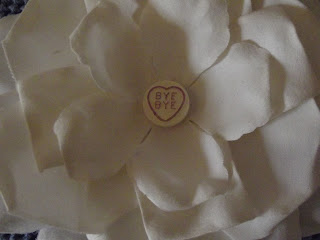